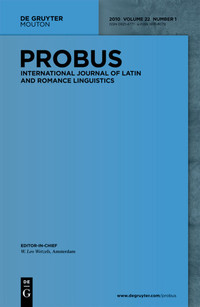 In this paper we are interested in the relation between two facts accompanying the diachronic change from Latin to Romance within the domain of the morphological and argument-structural properties of the predicates expressing change. On the one hand, the element encoding the transition itself, which we call the Path, and the verb are realised as two distinct morphemes in Latin, but as one and the same morpheme in the daughter languages: in Talmy's (2000) terms, the former is a satellite-framed language and the latter are verb-framed languages. On the other hand, there is a whole range of argument-structural patterns which are found in Latin but not in Romance: unselected object constructions, complex directed motion constructions, productive locative alternation, etc. We show, within a syntactic view of argument structure and morphology, that both facts are intimately related. Furthermore, we provide data from Old Catalan showing an intermediate stage between the Latin satellite-framed system and the Romance verb-framed system.