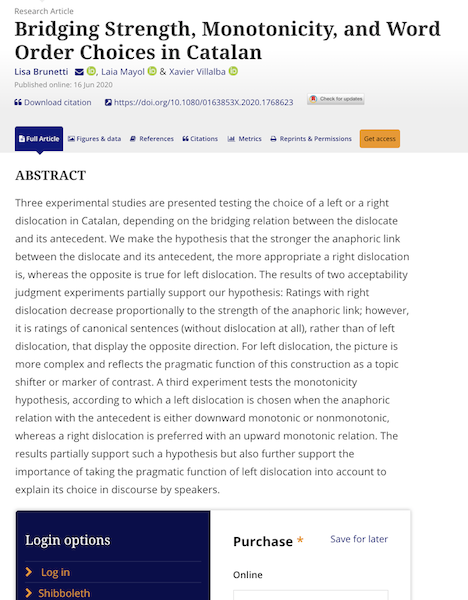 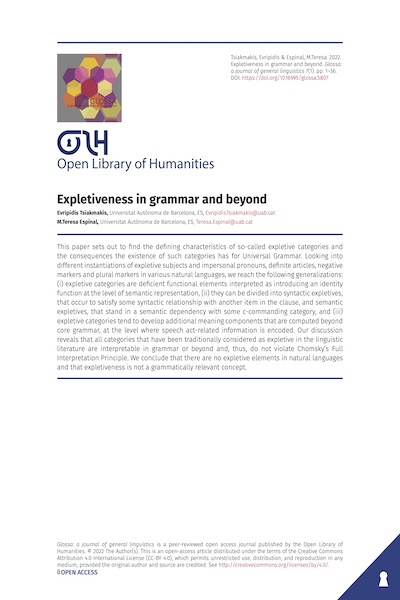 Expletiveness in grammar and beyond

This paper sets out to find the defining characteristics of so-called expletive categories and the consequences the existence of such categories has for Universal Grammar. Looking into different instantiations of expletive subjects and impersonal pronouns, definite articles, negative markers and plural markers in various natural languages, we reach the following generalizations: (i) expletive categories are deficient functional elements interpreted as introducing an identity function at the level of semantic representation, (ii) they can be divided into syntactic expletives, that occur to satisfy some syntactic relationship with another item in the clause, and semantic expletives, that stand in a semantic dependency with some c-commanding category, and (iii) expletive categories tend to develop additional meaning components that are computed beyond core grammar, at the level where speech act-related information is encoded. Our discussion reveals that all categories that have been traditionally considered as expletive in the linguistic literature are interpretable in grammar or beyond and, thus, do not violate Chomsky’s Full Interpretation Principle. We conclude that there are no expletive elements in natural languages and that expletiveness is not a grammatically relevant concept.

Cabré (2022). Syncretism and ordering in the evolution of Catalan pronominal clitic clusters 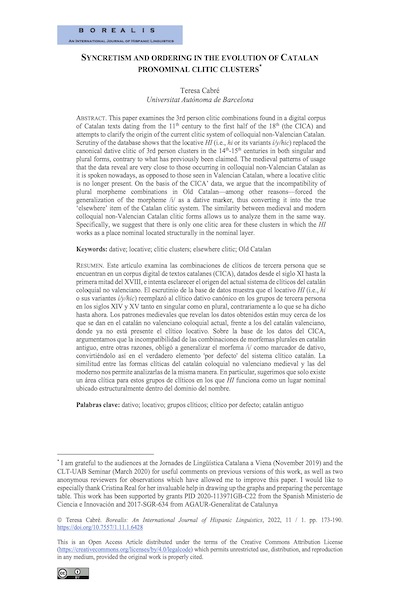 Syncretism and ordering in the evolution of Catalan pronominal clitic clusters

This paper examines the 3rd person clitic combinations found in a digital corpus of Catalan texts dating from the 11th century to the first half of the 18th (the CICA) and attempts to clarify the origin of the current clitic system of colloquial non-Valencian Catalan. Scrutiny of the database shows that the locative HI (i.e., hi or its variants í/y/hic) replaced the canonical dative clitic of 3rd person clusters in the 14th-15th centuries in both singular and plural forms, contrary to what has previously been claimed. The medieval patterns of usage that the data reveal are very close to those occurring in colloquial non-Valencian Catalan as it is spoken nowadays, as opposed to those seen in Valencian Catalan, where a locative clitic is no longer present. On the basis of the CICA’ data, we argue that the incompatibility of plural morpheme combinations in Old Catalan—among other reasons—forced the generalization of the morpheme /i/ as a dative marker, thus converting it into the true ‘elsewhere’ item of the Catalan clitic system. The similarity between medieval and modern colloquial non-Valencian Catalan clitic forms allows us to analyze them in the same way. Specifically, we suggest that there is only one clitic area for these clusters in which the HI works as a place nominal located structurally in the nominal layer.

Margaza & Gavarró (2022). The Distribution of Subjects in L2 Spanish by Greek Learners

The Distribution of Subjects in L2 Spanish by Greek Learners

Our study examines the expression and position of subjects in L2 acquisition, two phenomena that are studied within the framework of the Interface Hypothesis (IH). The first version of the IH predicts that interface properties involving syntax and another cognitive domain may not be fully acquirable in a second language (Sorace and Filiaci, 2006; also Sorace, 2011). The second version of the IH predicts that formal properties involving the syntax-semantics interface are unproblematic to acquire in L2 grammars compared to the vulnerable properties integrating syntax with the higher level of pragmatics (Tsimpli and Sorace, 2006). We test these IH versions in L2 Spanish as acquired by L1 Greek speakers, a language combination understudied in the literature. Both languages share the null subject parameter, but still the IHs predict incomplete command at the syntax-pragmatics interface. Two acceptability judgment tasks were designed for Spanish: the first task tested null/overt subjects in referential contexts and the second task tested preverbal/postverbal subjects in informational contexts. Participants were L1 Greek intermediate and advanced learners of Spanish and native speakers of Spanish (15 subjects in each group). In the first task, both experimental groups showed target-like distribution of null/overt subjects in most non-contrastive and contrastive contexts, except for the advanced group in unambiguous referential contexts. In the second task, the respective groups accepted felicitous preverbal subjects with unergative verbs, but diverged from native-like distribution of postverbal subjects with unaccusative verbs in neutral contexts. The L2 groups showed a high preference for unfelicitous preverbal subjects with both intransitive verbs in informational contexts, contrary to the subject inversion patterns of the control group. The results obtained were not consistent with the IH predictions, and other factors such as the type of subject, verb class and context played a role in L2 performance. 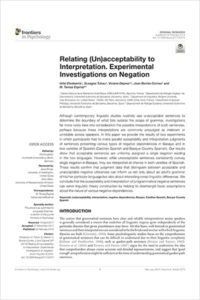 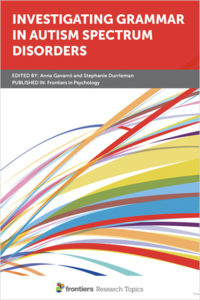 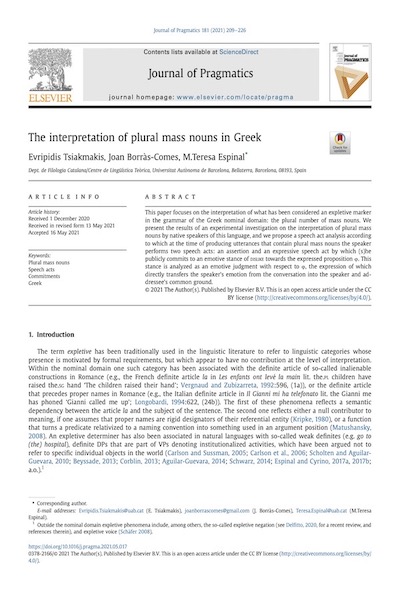 The interpretation of plural mass nouns in Greek, Journal of Pragmatics 181

This paper focuses on the interpretation of what has been considered an expletive marker in the grammar of the Greek nominal domain: the plural number of mass nouns. We present the results of an experimental investigation on the interpretation of plural mass nouns by native speakers of this language, and we propose a speech act analysis according to which at the time of producing utterances that contain plural mass nouns the speaker performs two speech acts: an assertion and an expressive speech act by which (s)he publicly commits to an emotive stance of dislike towards the expressed proposition φ. This stance is analyzed as an emotive judgment with respect to φ, the expression of which directly transfers the speaker's emotion from the conversation into the speaker and addressee's common ground.